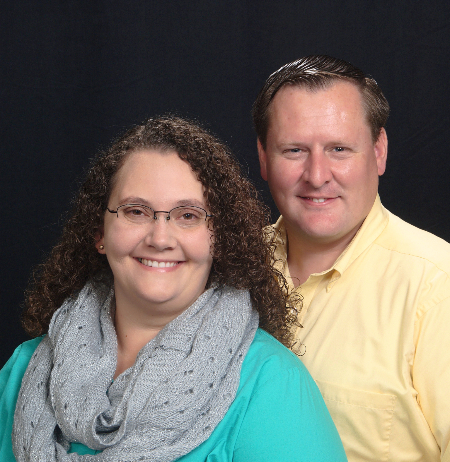 Caleb - I was born and raised in a Christian home.  When I was 5 I saw my sister go forward in chapel at school.  That evening I asked her what she had gone forward for, and she told me how she had received Christ as her Savior.  I had some questions so she told me to go ask mom about it.  I went inside and asked my mom how I could go to heaven when I die?  She then took me through the Romans road and I bowed my head and asked Jesus to be my Savior.  The date was Oct. 13, 1987.  I was baptized in Grace Baptist Church of Cody, WY.
I was called into the ministry at Castle Rock Baptist Camp in Gallatin Gateway, MT.  I surrendered to do whatever God wanted me to do.  In 2000 I began attending West Coast Baptist College with the goal of graduating with a Major in Missions.  During Missions Conference of 2002, I went forward and surrendered to go to Africa. In March of 2011 our church had missionary Nathan Owens in one Sunday.  After viewing his presentation, I could not understand how there were only 12 missionaries to nearly 20 million people in Cameroon.  The people were begging him to stay and start churches.  With people who were so open to the gospel, why was no one going?  After praying about it for 6 weeks, I approached my pastor and he was excited for us.  We continued to pray, and I again sought counsel from several Godly men.  It seemed like every message was telling me to go, and there were a couple of verses in particular that helped confirm this decision.  The first is Isaiah 6:8 which I read the Monday after the Owens were in our church.  Another is Ezekiel 22:30 which Bro. Samms preached on at the Youth Conference we took the youth group to.  With this verse I keep thinking if we don't go, who will?  Through these and many other verses, and messages that were preached the Lord confirmed that He has called us to go, and preach the Gospel in the country of Cameroon.

Sarah - I also was born and raised in a Christian home. When I was younger I made a profession of faith, but I really did not know what I did. The lady said to pray a prayer, so I did.  I would always tell myself that I had prayed so I would go to heaven. I was bus captain for several years, worked in children's church, sang in the choir, but still knew I was not saved. I wanted to do what was right and knew how to act out the Christian walk (works). In my teen years I kept telling myself that I needed to get saved, but my pride would stop me. Well, I decided to go to West Coast Baptist College in 2000. When I went to Bible college I thought maybe I would get saved because I didn't know anyone there, but then I got to meeting new people and my pride got in the way.  During my sophomore year Dr. John Goetsch was preaching at a winter revival at Lancaster Baptist Church. He was preaching on the end times and I realized that I couldn't fight it any more. Finally on January 29, 2002, I dropped my pride and received Christ as my Savior. Since that day I have not doubted once. I was baptized the following Sunday at Lancaster Baptist Church.
In April 2002 I was able to go on a mission's trip to Mexico with my home church. It was there that I surrendered my life to serve Him however He would want to use me, particularly in the area of missions. After graduating I came home and worked in my home church, under Pastor Eldon Martens, as church secretary. I did so till our first daughter, Hannah, was born. The Lord has led us down many different paths these last few years. I know His hand was in all of it. When the Owens family came to our church to present the field of Cameroon, Africa, I was very moved at how the people were so open. I felt a burden to pray for the Owens family as they went to this needy country. Then my husband told me that night that He believed the Lord was calling us to Cameroon. To be honest, I didn't ever think the Lord would lead us to Africa. Africa was one of those places preachers always mentioned when they talked about missions. The Lord was working on my heart. I had always told the Lord that I would go where He wanted, but I didn't know why it was so hard to follow His leading to Cameroon. I had been praying about it for several days when the Lord led me to a verse in Proverbs 23 that said "son give me thine heart." At that moment the Lord showed me that I had been holding some of my heart and life back and not giving it to Him. I completely surrendered my life to be used for the Lord.